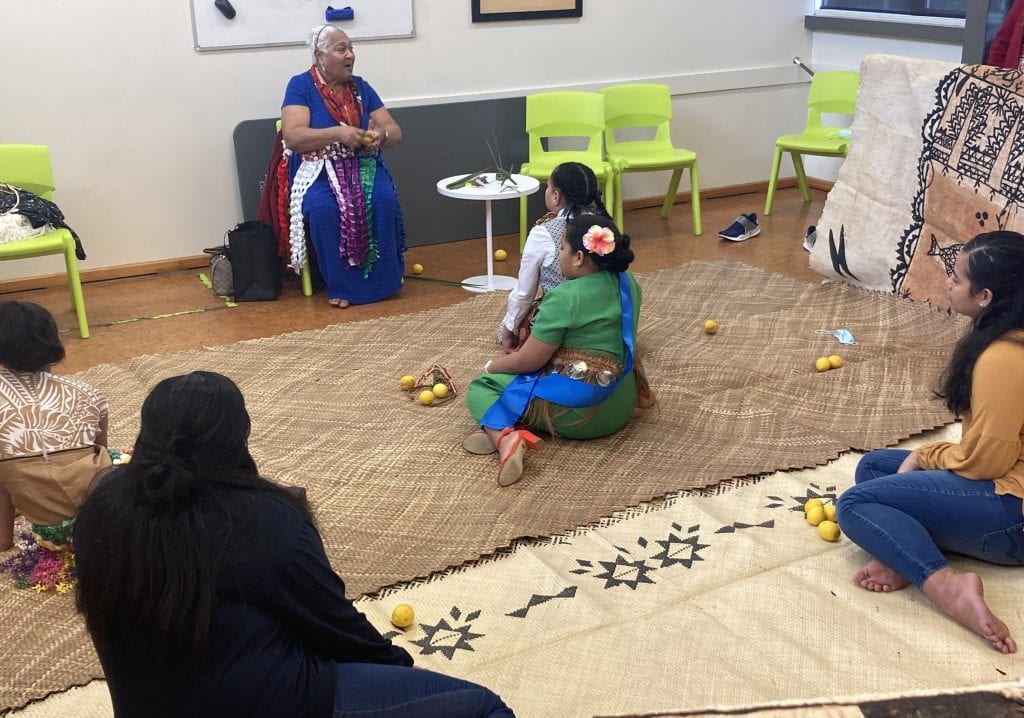 Hiko and Heu are two traditional Tongan games that were demonstrated and explained by Milika Pusiaki, Tufutele Finau and Viliami Siale Fifita (Mauo) to the Fe’unukoula Academy.

Hiko is a multi-generational juggling game only for women. This is different to how jugglers in a circus juggle which are practiced in different ways.

“In Hiko, we learn to juggle by progressing in stages, as we get more confident we move to the next stage,” says Tufutele Finau (main image), who taught it to Fe’unukoula Academy, and supported the young girls by dancing and mimicking hiko.

For Milika Pusiaki, she remembers regularly playing hiko with her friends in Tonga.

“We would use candle nuts and refer to each as one of our boyfriends. So, if you had three candle nuts, you would name them and play with your friends.”

“You use two sticks, a short one and a long one. You place the short stick on the ground over a hole and then using the long stick you hit it away. If the others catch it, you’re out. If not, the fielders throw to hit the long stick which lies across the hole.”

“We’re honoured and privileged to have Hiko and Heu as part of Village Games. Milika, Tufutele and Viliami are well respected and recognised figures in the Tongan community for their pride and passion to learn and preserve their culture.

“We’ve had a positive response from communities about the Village Games movement, as they learn and connect with their culture, identity and movement through traditional games.”

Healthy Families South Auckland is utilising the Village Games initiative to begin conversations with Māori and Pacific people about their lived experiences in Aotearoa and the barriers they face to being active.

“Ultimately we want a collective community voice to drive policy change so Māori and Pacific communities in South Auckland are supported to use traditional village games, their culture and language to achieve good health and wellbeing,” explains Fila.